The 2011 Gala Awards Night took place in the Workman’s Club and was attended by actors and crew, guests, sponsors, volunteers and the Festival committee.

Congratulations to all of the nominees and award-winners. As always the categories were very competitive.

Mark Pollard has actively supported the concept of the gay theatre festival since its inception. He has made a substantial contribution to its development as a recognised art form. Mark has consistently has produced and directed a wide range of award winning quality theatre that has enriched the International Dublin Gay Theatre Festival since 2004. This award honours his many achievements as a professional Director and Producer.

The Hilton Edwards Award for Best Aspect of Production 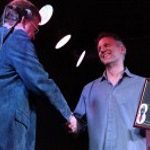