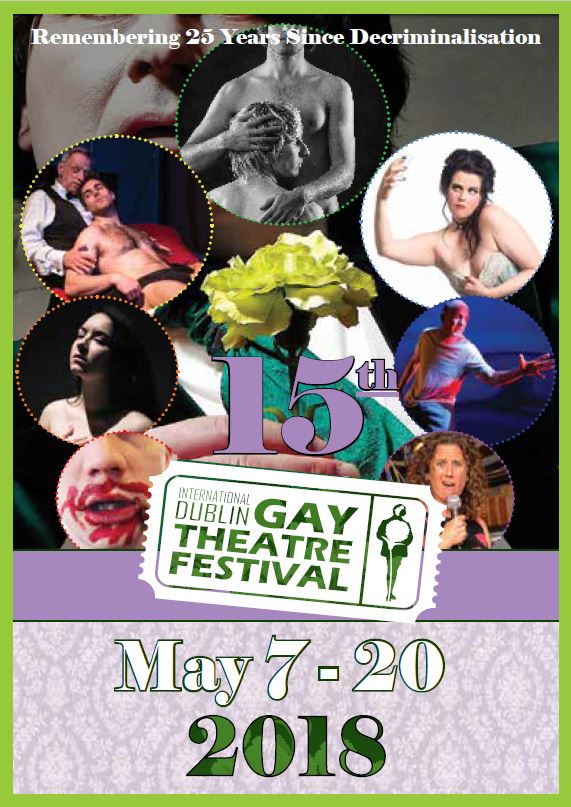 25 Plays for 25 Years of Decriminalisation

“This is a special anniversary year for the LGBTI community in Ireland and the International Dublin Gay Theatre Festival has assembled a top class programme of Irish and International LGBT theatre, full of stories that could not be told in the past and that are waiting to be told today” said Founder and programmer Brian Merriman.

“It is 35 years since the appalling outcome in the Declan Flynn (Fairview Park) murder trial and “The Drowning Room” by Irish playwright, ‘Verity-Alicia Mavenawitz’ recounts a family gathering after a similar verdict in Ireland. Voices that lived before and during decriminalisation take to many stages including Tennessee William’s final years in ‘His Greatness” from Chicago, Oscar Wilde appears in ‘Beloved Sinner’ and again with, William Shakespeare and Mary Shelley who are amongst the “Writers In the Stars” battling for eternal fame.

“2HISstories” look at Irish life in the 1980s in ‘The Off Switch’ and UCD founder, Cardinal Newman’s lifelong friendship with Fr Ambrose St John in ’The Second Miracle’. John M Farrell’s ‘3 Lies About Brooklyn’ follows the story of being trafficked from an Irish Mother and Baby home to Brooklyn and back. ‘Let Me Look at You’ captures a moment in time in Soho in 1993.  Ireland’s Breda Larkin, Canada’s Franny McCabe-Bennett and UK’s Annabel Pribelski headline our top class female comedy performances.

‘Tab and Landon’ from Canada is a dark insight into family relationships arriving from Theatre Outre, Canada with ‘Blue Island 99’ a coming out story – our first by a Taiwanese  artist. The diversity of the Mens’ and Womens’ Shorts programme sees Ireland’s LGBT community group Acting Out team up with the world’s first Gay Theatre Company, New York’s TOSOS is excellent programmes of short plays.

Exciting theatre from young companies includes the UK’s ‘Cherry Pickings’, ‘Ginger Beer’ and ‘Memories We Lost In The Fire’. Young Irish playwrights premiering their work include Conor Burke’s “Ethan and Evan and All They Know” and Robert Downes’ ‘Are You Lonesome Tonight?’.

Renowned lesbian playwright, Carolyn Gage’s insight into Marty Mann, founder of the National Council on Alcoholism premieres from the USA as Irelands ‘Blue Heart Theatre Company’ premieres ‘Passing On’ a story of surrogacy, family and choices.

“We mark this 25th anniversary year with a free opening seminar on visibility and decriminalisation, with speakers Tonie Walsh, Grainne Healy, Kieran Rose and Chaired by Seamus Dooley. The free play reading is the world premiere of ‘Party Boy’ based on the true life story of an Irish gay go-go dancer” added Brian Merriman. There is a nightly Festival Club and the Festival is supported by The Arts Council, Dublin City Council and Failte Ireland.  All of this, plus our incredible voluntary support, makes Dublin the biggest centre for gay theatre worldwide.

“There are two separate weekly programme of accessible and low priced theatre in city centre venues from May 7th– 20th. It is an honour in this anniversary year, to stand on the  shoulders of all who got us to this point and those who continue to struggle for freedom worldwide” added Brian Merriman. “25 years ago, this would have been unimaginable – today, Dublin and Ireland opens its arms to diverse artistic voices and we are very pleased to welcome all the companies and you, our audience to our unique programme of 25 plays for 25 years”, he concluded.

Tickets are now on sale from www.gaytheatre.ie. For further information please contact Brian Merriman on 087 6573732