The unique festival which runs from May 3rd to 16th, is the largest such festival of its kind in the world, and has now grown to become one of the biggest annual showcases of theatre in Dublin with twenty seven plays vying for audiences’ attention this year.

The exciting programme of features, comedy and musical theatre includes Eight World Premieres, Eight European Premieres and Four Irish Premieres in what promises to be a tantalising two weeks of entertainment. This year the festival includes productions from Ireland, UK, USA, Spain, South Africa and Australia, with a particular emphasis on new writing from emerging playwrights.

Highlights from the programme include The Laramie Project (USA) a play which recounts the brutal kidnap and murder of Mathew Sheppard, Kiss the Women (South Africa), a brave and deeply moving exploration of growing up as a black lesbian in South Africa, Loaded (USA) a no-holds barred look at internet sex, identity and ageism, Exiles (UK) a fresh and unique perspective on James Joyce’s only play, Working Late (Ireland), a coming out comedy set in today’s economic crisis, Under the Rainbow (Ireland) a musical journey through the many lives of actress and entertainer Liza Minnelli and Drags Aloud (Australia) Joan Rivers support act that’s part Glee, part Scream, with a health dose of Priscilla Queen of the Desert!

Speaking at the launch the Lord Mayor said, “This festival continues to play an important role in the cultural life of the capital and its policy of inclusiveness and innovation has served it well since its foundation. It has made a strong contribution to livelihood of many artists and to date has given audiences a diverse range of entertainment. I wish the Festival well as it launches, what is a very ambitious programme for 2010.”

Festival Director, Brian Merriman, said “This year we break through many barriers with our diverse programme of theatre that seeks to dialogue culturally with mainstream society. He added that festival was “delighted to welcome so many Irish companies to our programme this year. Playwrights as young as 18 year old Aaron Rogers were successful amongst the largest ever cohort of Irish applicants.”

Full details of our programme and ticket prices are available on www.gaytheatre.ie. 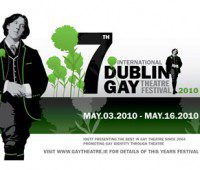