DUBLIN—The International Dublin Gay Theatre Festival returns to the stage (and bar) for its 19th year in Dublin from May 2-15. This follows an online festival in 2021 and cancellation in 2020, replaced by two Bursary opportunities and two new books of Irish LGBTQ+ plays.

“It is great to be back! Covid has badly hit the younger generation of artists deprived of opportunities to perform for over two years. The 19th Festival continues our mission of premiering new and inclusive LGBTQ+ stories on stage for Irish and International audiences. We are voluntary led and every cent we earn is ploughed into artist fees, supports for their theatre productions and celebrating our arts identity”, said Festival Founder Brian Merriman at a launch in Street 66, at 6pm on Monday April 11th by Senator Annie Hoey.

“Senator Hoey raised our predicament in Seanad Eireann when she learned that during Covid, the Arts Council, awash with money, decided to first cut our small grants by 50% (which we were dispersing to artists, unemployed due to Covid). Despite that, our friends rallied. We created two bursary opportunities with cash awards, which inspired 65 new Irish LGBTQ+ plays. We published the best of them in two new books and then did our first ever digital festival of 12 plays in conjunction with Dublin LGBTQ+ Pride, creating employment for isolated artists.”

He added:
“The cash rich Council decided to cut our grant in this year of recovery completely, denying us any funds for LGBTQ+ Theatre. This is singling out LGBTQ+ artists and punishing them at a time of recovery, as all Festival personnel donate their time to this artform. Such unusual and unwelcome treatment is unappealable in their limited, self determined, appeals’ process. But the best answer we can give to that ‘special treatment’ is not only to survive, but to continue to create theatre opportunities for Irish LGBTQ+ artists and allies and to welcome international friends to the Capital of Gay Theatre – Dublin! We are truly inspired by the productions and the generosity of friends who value the unique service we provide to an incusive arts community and audience”.

The rest of the week includes an exciting first for the fest: “Oíche Léite Drámaí (Scratch Night)” a free presentation of five Irish-language short plays from the queer Irish-language arts collective AerachAiteachGaelach, at Players Theatre, Trinity College on May 7 at 16:00.

Award winning writer, Amanda Brunker makes her Festival debut with “Curiousity” a sexually-fluid story starring Fair City’s Sorcha Furlong and Annete Flynn in Players Theatre. This is coupled with an Irish/Australian double bill from young women writers “Trolley’d/Who Pays the Bill and Baby and the Bathwater”.

Two Irish one-act plays, “Quarantine”, written and directed by Brian Quinn, and “Three Queens Stuck in Dublin City” by Tadgh Dolan are presented as a double-bill at The Teachers Club.

“Who’ll be the Mammy?” written and directed by Blue Heart Theatre Company’s Brian Higgins (IDGTF Best Actor, 2015) is about a married couple deciding whether they want to be two Daddies. It runs at the Ireland Institute/The Pearse Centre.
Brian Merriman’s “Straight Acting,” a comic drama runs from May 2-7 at The Teacher’s Club Studio, starring Dane O’Sullivan and Colin Malone. Do you have to be gay to play gay?

American Les Kurkendall returns to the festival with a “The Real Black Swann: Confessions of America’s First Black Drag Queen” at the mainstage of The Teacher’s Club. The play tells the true story of William Dorsey Swann, a former slave who became Queen of Drag in Washington DC in the late 1800s.

Joanne Callum Powers comes to Dublin from Cape Cod, Massachusetts, with her solo show “Miss Delta Township,” which will run at The Teachers Club Studio.

SQUAD Productions, “a socially conscious theatre company” from Ireland will present a free staged reading of their work-in-progress “Shame is the Name of the Game,” by Robert Downes at Street 66 bar on May 8.
Take Desire Away the award winning story of the writings of A.E. Housman stars Mansel David in The Ireland Institute, 27 Pearse Street.

In Week 2, the entire programme changes. Tony Award-winning producer Adam Weinstock returns with ‘What Doesn’t Kill You’ about an awakening after a near death experience.

The Covid pandemic has inspired LGBTQ+ playwrights to write about the forgotten pandemic of the 1980s. Quilt (with a G in the middle) tells the stories of AIDS in Ireland and abroad using true testimony at the Teacher’s Club. Audience members are welcome to have the name of any loved one lost to AIDS remembered on stage, by giving their name to the cast before each performance.

Acting Out, Dublin’s LGBTQ+ community drama group brings “The Death of Me” to The Ireland Institute, a new play featuring Rachel Fayne, written by Sean Denyer, who penned festival favourites “The Decriminalisation Monologues” and “The Ref.”

Another long-time festival participant, Provincetown Dramatic Arts from Massachusetts, brings four short plays, “Quickies” to the Teachers Club. Their LGBTQ+ short play menu includes “Madame Executrix” by Doug Asher-Best, “Look What You Made Me Do” by award-winning playwright/actor Lynda Sturner, “The Black Eye” by Jim Dalglish and “Pulse” by Margaret van Sant.

Wallace Norman, artistic director of the Woodstock (NY) Fringe, brings his solo show, “Brother’s Keeper”, which he wrote and performs to The Ireland Institute. Wallace’s play is about the growing up and coming out of a Catholic boy who has a “special interest” taken in him by a priest.

Theatre Outre joins with Route One Productions to bring “Legislating Love: The Everett Klippert Story” by Natalie Meisner to Players Theatre. Everett Klipper was the last person to be tried, convicted and jailed for homosexuality in Canada before it was decriminalised. The play features Kathy Zaborsky, a previous winner of the Festival’s Eva Gore Booth Award for Outstanding Performance by an Actress.

“The Silver Bell”, written by Hollyoaks writer and starring Alan Flanagan, with Brendan O’Rourke, is a new play about love and loss, with a touch of magical realism. It’s presented at The Teacher’s Club.

The Festival’s free annual panel discussion/seminar is on May 15 at The Teacher’s Club. This year’s topic is “Queer Theatre and Audiences in Ireland”, which poses the questions: How do artists get LGBTQ+ work on stage in a heteronormative society? Who comes to see it and what are the genres and topics people seek out? The participants include Tony-award winning producer Adam Weinstock, from New York; Kathleen Warnock, Associate Artistic Director (and Ambassador of Love) from TOSOS (The Other Side of Silence), New York’s oldest professional LGBTQ+ theatre; actor Les Kurkendall-Barrett and Irish writer Ella Skolimownski. Sarah Busch curates the event.

The Festival finishes up, as always, with its Gala Awards Night on May 15 at The Teachers Club. Participants gather to celebrate the work and the people who made it happen with musical, dramatic and comic performances and the presentation of the “Oscars”: that is, the statue of Oscar Wilde that denotes Outstanding Performances, Writing, Creative Aspect, and Intercultural Dialogue.

Our full 2022 programme can be found here. 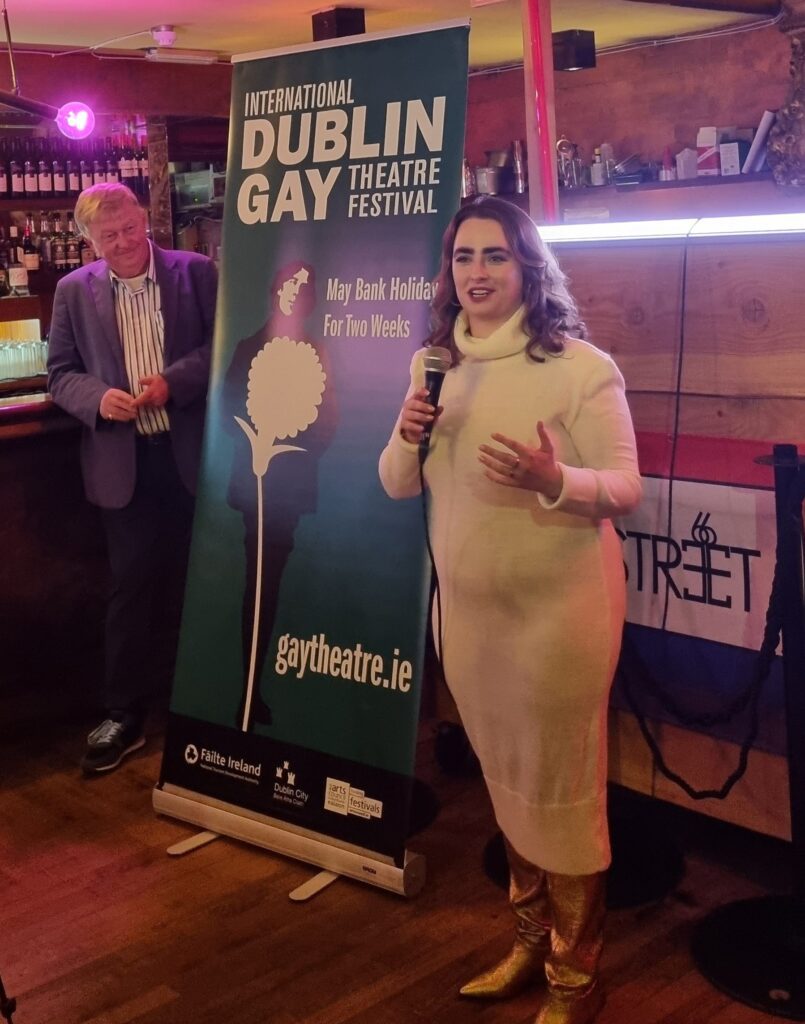