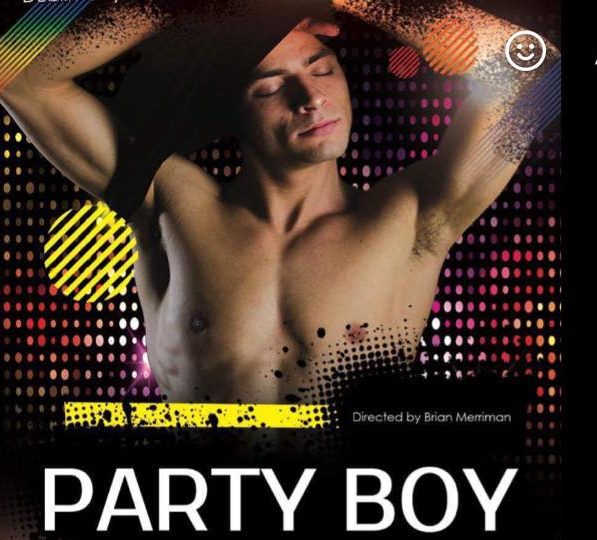 I dashed up O’Connell St. and stopped for an ever-present donut (crème-filled toffee with crumbles!) and coffee. I love going to Teachers (I’ve had a few shows there over the years). It’s a Georgian building with a black box theater in the basement, meeting halls and classrooms on the first floor, and a gorgeous bar on the second floor.

Near the top of the building, a couple dozen of us crowded into a meeting room for what was literally a table read: the actors sat behind a wooden table, and after a brief introduction by Brian, started reading the script.

I’m a fan of Brian Merriman the playwright, and have enjoyed his work, which frequently has a historical bent (“Eirebrushed,” “Wretched Little Brat”). This one is a departure for him. Inspired by a true story, “Party Boy” is the tale of a little gay boy who grows up in Dublin and Australia, and whose life and interests lead him into a career as a phone sex operator, a gym rat and trainer, and finally as a go-go boy and performer in live and filmed sex shows.

We’ve all seen the plays and read the books that tell and re-tell this story: most often they are morally superior, cautionary tales of young men gone astray and whose lives end all too soon because of an excess of everything, especially drugs. What makes this story different is that the boy has a mother who gives him unconditional love; she always takes him in when he comes home, and serves as both anchor and guide to him.

Party Boy faces not just the generalized homophobia of his home countries and communities, but also the approbation of a sex-negative society that lives to vilify sex workers (while always partaking of their services).

In a country and culture shaped by Catholic guilt and shame, Party Boy mostly takes to other countries to make a living, find companionship, and look for what he needs (which he doesn’t even know most of the time.)

Brian had hoped to stage the show this festival, but in real life, he had a hard time finding actors who were not afraid to take on a role that might carry such a weight of disapproval from the public. Delicate, toxic masculinity kept actors from playing an amazing role, actors who gave all kinds of reasons, except that they were afraid of it.

Brian read the role of Party Boy himself, with Maria Blaney playing the Mother, and Colin Malone playing all the other parts. (He f*cking nailed it, as we say in the theater.) Lia Caira did stage directions.

The reading kept us rapt, and it was real, urgent applause that erupted at the end. I’m sorry it’s not a full production in this festival. I know it will be seen, not just in Dublin, but other places. (I have my thoughts on its next steps, but never give critique unasked.)   KW

Kathleen Warnock is a renowned playwright and theatre producer based in New York.