The International Dublin Gay Theatre Festival returns to the stage for its 19th year in Dublin from May 1-15, after an online festival last year, and cancellation in 2020.

The week one programme (May 2-7th)  starts with Bank Holiday Monday matinees and includes an exciting first for the fest: “Oíche Léite Drámaí (Scratch Night)” a free presentation of five Irish-language short plays from the queer Irish-language arts collective AerachAiteachGaelach, at Players Theatre, Trinity College on May 7 at 16:00. Two Irish one-act plays, “Quarantine”, written and directed by Brian Quinn, and “Three Queens Stuck in Dublin City” by Tadgh Dolan are presented as a double-bill at The Teachers Club at 7.30pm

American Les Kurkendall returns to the festival with a “The Real Black Swann: Confessions of America’s First Black Drag Queen” at the mainstage of The Teacher’s Club. The play tells the true story of William Dorsey Swann, a former slave who became Queen of Drag in Washington DC in the late 1800s. 9pm.

“Take Desire Away” the award-winning story of the writings of A E Housman, with UK TV actor/writer Mansel David is in The Ireland Institute, 27 Pearse Street at 7.30pm.

“Who’ll be the Mammy?” written and directed by Blue Heart Theatre Company’s Brian Higgins (IDGTF Best Actor, 2015) is about a married couple deciding whether they want to be two Daddies. It runs at the Ireland Institute/The Pearse Centre at 9pm.

Joanne Callum Powers comes to Dublin from Cape Cod, Massachusetts, with her solo show “Miss Delta Township”, which will run at The Teachers Club Studio at 7.30pm.

Brian Merriman’s “Straight Acting”, a comic drama premiers from May 2-7 at The Teacher’s Club Studio, starring Jeremie Cyr-Cooke and Colin Malone. Do you have to be gay to play gay? 9pm.

SQUAD Productions, “a socially conscious theatre company” from Ireland will present a free staged reading of their work-in-progress “Shame is the Name of the Game” by Robert Downes at Street 66 bar on May 8 finishing up an action-packed first week of new, diverse theatre..

In Week 2, the entire programme changes. Tony Award-winning producer Adam Weinstock returns from the USA with ‘What Doesn’t Kill You’ about an awakening after a near death experience. Teachers Club Studio 9pm.

The Covid pandemic has inspired LGBT playwrights to write about the forgotten pandemic of the 1980s.  “Quilt” (with a G in the middle) tells the stories of AIDS in Ireland and abroad using true testimony at the Teacher’s Club. Audience members are welcome to have the name of any loved one lost to AIDS remembered on stage, by giving their name to the cast before each performance. 7.30pm Teachers Club Studio.

Acting Out – Dublin’s LGBT community drama group brings “The Death of Me” to The Ireland Institute  at 7.30pm. A new play featuring Rachel Fayne, written by Sean Denyer, who penned Festival favourites “The Decriminalisation Monologues” and “The Ref.”

Wallace Norman, artistic director of the Woodstock (NY) Fringe, brings his solo show, “Brother’s Keeper”, which he wrote and performs to The Ireland Institute at 9pm. Wallace’s play is about the growing up and coming out of a Catholic boy who has a “special interest” taken in him by a priest.

The Festival renews its long association with Canadian LGBT+ theatre. Theatre Outre joins with Route One Productions to bring “Legislating Love: The Everett Klippert Story” by Natalie Meisner to Players Theatre.  Everett Klipper was the last person to be tried, convicted and jailed for homosexuality in Canada before it was decliminalised. The play features Kathy Zaborsky, a previous winner of the Festival’s Eva Gore Booth Award for Outstanding Performance by an Actress. Another long-time festival participant, Provincetown Dramatic Arts from Massachusetts under the direction of US Festival Ambassador Margaret VanSant brings a feast of short plays from the home of US gay theatre – Provincetown.  Four short plays, “Quickies” are at the Teachers Club, 7.30pm. Their LGBTQ+ short play menu includes “Madame Executrix” by Doug Asher-Best, “Look What You Made Me Do,” by award-winning playwright/actor Lynda Sturner, “The Black Eye” by Jim Dalglish, and “Pulse,” by Margaret van Sant.

The Festival’s free annual panel discussion/seminar is on May 15 at The Teacher’s Club. This year’s topic is “Queer Theatre and Audiences in Ireland,” which poses the questions: How do artists get LGBTQ work on stage in a heteronormative society?  Who comes to see it and what are the genres and topics people seek out? The participants include Tony-award winning producer Adam Weinstock, from New York; Kathleen Warnock, Associate Artistic Director (and Ambassador of Love) from TOSOS (The Other Side of Silence), New York’s oldest professional LGBTQ+ theatre; actor Les Kurkendall-Barrett and Irish writer Ella Skolimownski. Sarah Busch curates the event.

The Festival finishes up, as always, with its Gala Awards Night on May 15 at The Teachers Club. Participants gather to celebrate the work and the people who made it happen with musical, dramatic and comic performances and the presentation of the “Oscars:” that is, the statue of Oscar Wilde that denotes Outstanding Performances, Writing, Creative Aspect, and Intercultural Dialogue. 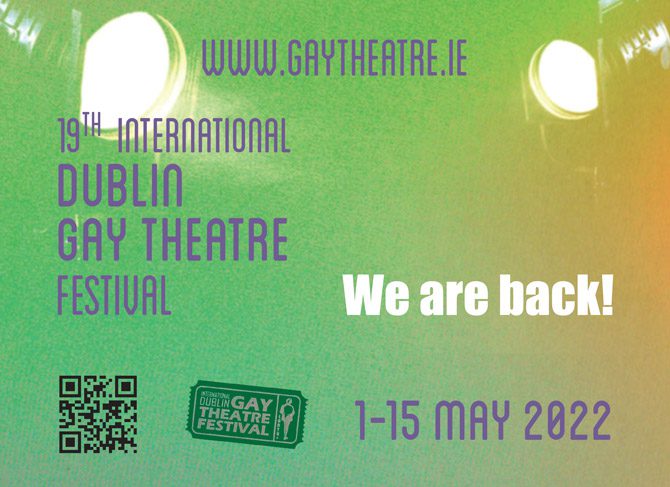