Written and performed by Joanne Powers
Review by Kerric Harvey

From a shocking opening that grabs both your attention and your nervous system from the moment the stage lights come up, “Miss Delta Township” locks on and never lets go, kicking off in the 1960’s and then moving at warp speed through several decades of life and longing in a “typical” suburban American family . Except that this family, as it turns out, is anything but typical, although there are times during the show that ring eerie bells for almost anyone who came of age in that awkward and often cruelly conventional era.
Joanne Powers’ exuberantly creative and energetically delivered performance is, fundamentally, a romp through childhood trauma and the special people who bring it to you. It’s funny, fast moving, articulate, incisive, and over-the-top in the best way possible. Peppered with apt cultural references that lend a good dose of political subtext to the non-stop comedic action, there’s not a wasted word in this tightly woven collection of scenes from the author’s life. Unlike many “rememberies” pieces, however, there’s not a shred of insularity or self-absorption in Powers’ long solo show.

On the contrary, “Miss Delta Township” exudes such an exquisite sense of shared humanity, both the enormous strength and the shattering frailties of this Earth-bound journey, that it invites audience self-reflection even at some of its funniest moments. Humour disarms the ego, and Powers makes brilliant use of that principle as she shepherds us through her wince-worthy childhood and adolescence into an even darker adulthood.

Stuffed with emotional misery wrapped in belly laughter, this feels like a longer one-act than the 70 minutes it occupies on the clock. In fact, I wonder if it might be even better as a two-act play, still short, but with enough breathing space for the two sets of narrative material – childhood and grown-up years – to settle more fully into their respective story arcs. Then, too, the sheer amount of stamina it must take for the actor to maintain the play’s rolling boil is staggering. One act or two, however, “Miss Delta Township” is also a pitch-perfect showcase for Powers, whose wide range of performance talent is both elastic and impressive. She dances, she marches, she prays; she performs classical theatre as an adjunct to high drag. And we are all the better for it.
Most of all, she transforms everyday household objects into the stuff of imagined Hollywood glamour, and mundane places like grocery stores into high drama performance venues. In doing so, she raises oddly-shaped but nonetheless critical questions about cruelty and love, disappointment and hope, illusion and reality, compassion, hypocrisy, and unexpected grace. And she keeps you laughing, all the way through.

“Miss Delta Township” may sound like a narrated tour through someone else’s family photo album, but it’s really a poignant and vivid reminder of the connectedness of all things, and the impossible paradox of being yourself in the noisy company of those who love you. See it. You won’t be sorry. 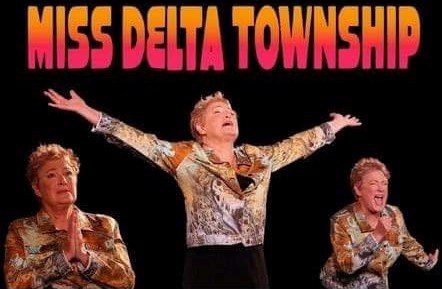