Written and performed by Les Kurdendall
Review by Kerric Harvey

It’s not easy, being Queen.
It’s especially not easy if you’re a gay, Black, male born into slavery in the 19th century American South.
And if you like to give parties for everyone you can find who might be, well, more than a little bit like you, life actually becomes quite difficult. Downright dangerous, really, because those “parties” are really nothing less than political actions, even if the people attending them are extraordinarily well dressed. And you, yourself, become a living, breathing, walking threat to the status quo, just by being yourself. And that can get you killed. Certainly, it can get you jailed.
Over, and over, and over again.
But it cannot stop you, if you have decided to be unstoppable. A lesson from the 1800’s, as relevant and as needful today as it ever was, then…especially if you’re a Black, gay male, born into the 21st century’s lingering and lethal systematic racism.
This is the deftly told story of William Dorsey Swann, also known as “The Queen,” who presided over Washington, D.C.’s gay “party scene” in the aftermath of the Civil War. By creating a space in which gender fluidity could be expressed and explored in a period when most forms of sexual variety were against one law or another, Swann also became a role model, an inspiration, and quite possibly the first American gay activist of record for LGBTQ+ people of all races and varieties during a time of turbulent social transition in the nation’s capital. It is also the story of the writer/performer’s personal and political unfolding, based on some remarkable experiences during an unexpected surgical procedure.

It’s not easy being Queen, and it’s not easy telling the Queen’s story in a 60-minute one-person show, either. A play this ambitious could easily slide into glib superficiality on the one hand, or pedanticism, on the other. But, instead, Kurdendall has created an engaging, approachable, forceful and fascinating tale that feels intimate while still addressing epic historical events and illustrating their relevance for social justice movements today. “The Real Black Swann” is that rarest of all things: A history lesson that feels like it actually happened to real human beings, superbly wrought into a story that makes us realize that “history” just means “today,” only earlier.
It’s the storytelling that’s the dominant gene in this potent and important mix, which is exactly as it should be. Kurdendall’s work has a defined and robust dramatic arc, in which he coaxes both of his characters (the contemporary “him” and the Queen as encountered in a time-travelling, drug-induced form) through a classic three-act structure in such an artful fashion that the structure itself becomes invisible.
But it’s there, guiding the characters through their respective hero’s journeys, and bringing us, the audience, along with them so that we leave the theatre as slightly different people than when we entered it. Along the way, we revisit some of the racial tragedies – and outrages – of our own time, as well as getting an introduction to antebellum pioneers in the gay rights movement — who would have been shocked to hear themselves described as such.

Which brings us back to the dramatic brilliance and the social urgency of Kurdendall’s play.
Partly an express lane education in several hundred years of gay activism, partly a re-exploration of contemporary racial violence in today’s United States, partly an exuberant homage to the narrative tradition of snapshot visits to life’s unexpectedly pivotal moments, reminiscent of “A Christmas Carol,” “It’s a Wonderful Life,” and “The Wizard of Oz,” but most of all, a rattling good story, “The Real Black Swann” is a real gem.

Urgent, important, innovative, engaging, and superbly executed by an able and talented artist. Everybody should see it.  I hope to see it again. 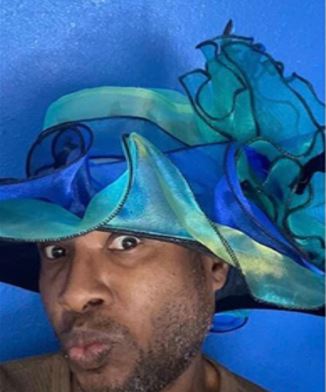