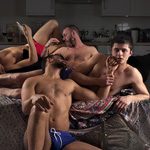 This excellent production from Kings Head Theatre must rank as one of the most graphic and hard hitting ever staged in the festival.  The first rate cast of five fit guys are totally believable as they strip down, chill out and recite the graphic stories of real men whose life on the gay scene is reliant on drugs and sex. It is a shocking story. The absence of morality challenges the audience to morally respond to the stories of a couple, a Pakistani married father, a young American and a Welsh HIV positive guy. The basis of their “friendship” is to party. They know each other’s bodies but they don’t know the people. The only offer of comfort is sex, empathy is expressed through another hit.

Using real testimony of gay men who live their lives on the chem sex circuit, this play written and directed by Peter Darney is riveting theatre. It answers a lot of questions. Now free, there is a section of the gay community that has recreated its own underground. The ghetto is their home. There is a silent clock ticking behind this as the characters struggle for the attention gay guys get when they are young, which wanes unless relationships are made and thrive. This play offers a real insight into the gay obsession with gym fit bodies – it is all that is seen at these parties. It answers why so many “ex twinks” see no future other than suicide, so they hurl themselves towards premature death. The human sub plots, the loss and desperation for intimacy instead of sex, are stark and touching.

This wonderfully scripted and directed ensemble are not chilling as much as we shiver in the chill of one of the best pieces of harsh, realistic contemporary theatre to grace a festival stage. Don’t miss it!