Julie Gieseke has brought her solo show Borderline A**hole to the International Dublin Gay Theatre Festival from the “lesbian capital of the world”.

After years of chasing unavailable women, Julie found her ideal girlfriend. She’s really into Julie. Miracle: This doesn’t make Julie want to run. The only trouble is they can’t agree on one thing – that Julie is the problem. Is Julie an asshole or a borderline? Julie can’t tell.

It is hard to believe that Gieseke only began writing for stage 8 years ago when she took a solo performance workshop to get over her fear of public speaking. Through the workshop, she discovered that she actually loved performing her own writing.

She has gained an avid and loyal following for her no-holds-barred, courageous authenticity which we are treated to en masse in Borderline A**hole.

Julie brings us on her journey of meeting “the one” and along the way, the story unearths many great human truths performed wonderfully through layers of humour, sadness, curiosity and hope.

There is true integrity in the story’s exploration of love and loss that will resonate with many. This is due in no small part to Julie’s ability to make you feel like your talking to an old friend. The poetic rhythm and ease in which she tells the story with only the addition of two stools and lighting transport you to the situations she describes.

Her use of body language to embody the characters, evoke an emotion and create a situation is a real testament to Julie’s talent for storytelling.

Borderline A**hole is a time capsule of an emotional journey exploring mental health, grief and relationships. Do not miss the opportunity to see this five-star performance.

Read the full article by Katie Donohoe in GCN here.

Julie Gieseke is an American storyteller of charm, insight, wit and wisdom. She lulls the audience into a false comfort with her mellow tones and gentle pace, but her observational skills are razor sharp. Julie is questioning. She holds herself responsible for her lack of a date and walks on eggshells to achieve her goal putting herself second. Her observations on her dating pool are wonderfully colorful and brutally honest. Quite easily, she could turn the piece into an angry rant against the stereotype but she is too clever for that, as she lays out all types for us to rant about if we choose to do. As with most reality TV or contemporary American storytelling, illness or tragedy is used to create empathy. Gieseke’s skills as a storyteller don’t need that but she dips in anyway. We sail through the expensive world of therapy until she is finally challenged about having a borderline personality disorder. Here our artist spares us the $6000 dollars and six months of sessions by condensing in a wonderful way, the therapy process into a few minutes of finely tuned theatre. Yes, amongst all the characters we meet, one does have a personality disorder. It’s not a borderline case either and spoiler alert – I didn’t think it was Julie – perhaps neither will you. An hour of warm womanly wisdom, cleverly told by an actor with a charming presence.

Read the full article by AO’B on our Facebook page.

Everyone has a type, or so we think. Julie was no different. She knew what kind of woman she liked and was so determined to find her, she had even employed a lesbian dating coach. But then she meets her dream woman who is nothing like what she envisaged for all these years. The only problem is that she thinks Julie may be borderline (suffering from Borderline Personality Disorder for those not in the know)  and isn’t prepared to be with her until she seeks help for her issues. Cue a one-hour journey through one woman’s struggle with her sense of self and her mental health all while dealing with her mother’s terminal illness an imminent demise.

Written and performed by Julie Gieseke this is a very genuine and moving piece. It is more like sitting listening to a friend lament their lack of dating success than a show. Admittedly, the Ireland Centre is an intimate venue but you get the impression that Gieseke could make an audience feel like that no matter how large the space was. It is almost conspiratorial – like you are being let in on a secret.

The writing is witty and poignant. When she talks about her mother you feel the genuine affection emanating from her. Her escapades with the dating coach are hilarious and her experiences in group therapy make for plenty of comedic moments. She has paced this well. It coasts along running the gamut of emotion. Throughout, Gieseke is engaging and genuine.

The lighting design is simple and effective. It doesn’t distract from one woman telling her story. The stage is sparse other than two stools which Gieseke utilises as props becoming everything from a sports car to luggage to the table in a fancy restaurant. While this mainly works there were one or two occasions where I found the constant playing with the stools somewhat distracting. It almost took me out of the story. Gieseke has enough presence and physicality not to have to rely so heavily on props.

You often look at one person shows and imagine how they would be if you expanded the world of the play and employed a few more actors but in this case it is difficult to imagine anyone other than Gieseke sharing this intimate story.

Extremely compelling, it is difficult to believe that Gieseke is only writing and performing for eight years. It is surprisingly endearing and warm, this doesn’t feel like an hour and when it ends you will find yourself wanting to know more.

Read the full article by Fran Winston for No More Workhorse here. 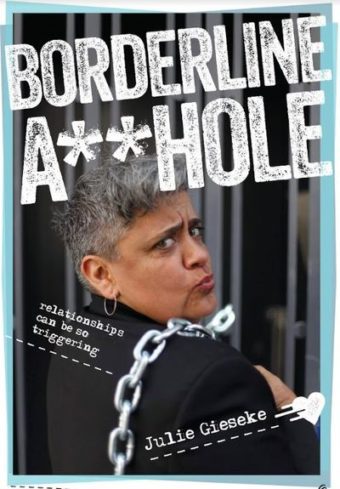