In the absence of any mainstream media reviews of our innovative work – we continue our tradition of inviting independent theatrically qualified reviewers to appraise the plays in the Festival.We will not be erased or silenced.

“I See You, Tom Kennedy” The Teachers Club,36 Parnell Square, nightly at 7.30pm

“Endings are always hard, especially when they don’t actually happen. A bad marriage, a medical catastrophe, an unpaid parking ticket, a root canal that seems like the reinvention of Purgatory, or a crisis of consciousness. Anything that goes on too long takes on a life of its own, usually to the detriment of everyone involved. It’s difficult, sometimes agonizing, to have the action stop before the story is over. Especially if it’s some one else’s story in which we played a pivotal role without even knowing it.

The protagonist in “Tom Kennedy” finds himself suffering from exactly this type of angst. He did something wrong, very early in his Garda career, something that seemed inconsequential at the time, but which ruined a man’s life. And now, 44 years later, he wants to talk about it. He wants to apologise. The Big Question, of course, is….Why?

And the Even Bigger Question is: Does he have a right to do so, or does his search for forgiveness only reinforce the kind of privilegde that let him inflict that long-ago damage in the first place?
“I See You, Tom Kennedy” is a big little play. It deals with issues both universal and specific, managing to fit a robust dose of modern psychology and moral complexity into an engaging and sophisticated 75 minutes. It must have been a difficult play to put on its feet, since much of the escalating tension is built around awkward silences and conversational false starts, both of which can be directorial nightmares. But “Tom Kennedy” succeeds beautifully in this, with pitch perfect timing in all the key places and a creative set design that maximizes the black box experience in an elegant and innovative way.

Set design, directing, blocking, and acting all speak to the “plus” side of the ledger in ways that enrich a short piece tackling massive issues. The chemistry between the penitent officer and his Garda daughter is especially vibrant, although all three characters are skillfully acted with commitment and professionalism. Solid performances by Tom Noone, Tom McGrath, and Clodagh Whelan clearly flourish under Siobhan Duggan’s deft directing, bringing into focus crucial questions about the relationship between past and present as a post-decriminalization Ireland tries to envision the future. If the script occasionally slides a bit towards glib solutions, it is still to be lauded for raising delicate but fundamental questions.

Production company Fior Sceal (“True Story” in Irish) has as part of its mission a desire to build theatre around true events and which addresses real issues. If “I See You, Tom Kennedy” is any indication of how the approach this, then Fior Sceal is a company to watch, especially in a social moment when the questions we think to ask are almost more important than “answers” we think we know.

Read the full article by KH on our Facebook page. 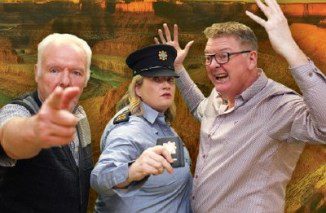