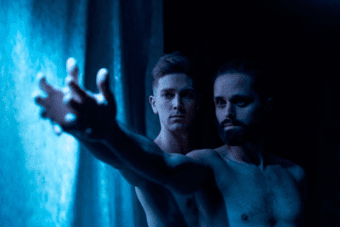 This Canadian visual treat from the pen of Brett Dahl, under the direction of Jay Whitehead is an all embracing multi-genre theatrical conversation witnessed by the audience.

The highly visual presentation is quite a triumph for fringe theatre as the senses are teased, lulled and shocked by light, sound and sensual dance movement. Clearly the most “alternative” of this year’s offerings, Dahl presents himself almost as a novelist and we appear to be present as his characters seek to break free from the lush constraints of the author’s prose to shake the narrative into the 21st century club scene. The physicality is sublime and beautifully portrayed. The communications contrast are an achievement that push against the limitations of fringe theatre with considerable success. There is trauma, enticement, mystery and violence. There is blending of contemporary and cultural imagery which leaves each individual audience member present in their own play. Is it real? Is it happening? Who is speaking? The setting is on the edge of the forest outside a town. The encounter is between two men but clearly we are all supposed to be on the edge. Faultless diction, exact timing, a sensual rhythmic duet of language and movement from the performers and a highly charged soundtrack and lighting mood are the key components of this visual treat. Excellent performances and a complete use of the theatrical venue leads me to believe Theatre Outre is as much an interpreter of this experience as is the playwright. They hold our hand on a journey of confusion, fear, lust, violence and courage. It has happened to us all at times and is now happening again on stage. But what exactly is it? If an lgbt festival wants to include the queer and alternative branches of the family, they will see themselves in this dark take of many styles which impresses with its artistry and masculine dance.