Running every night at 9pm until Saturday, 11 May as part of the International Dublin Gay Theatre Festival, Revolting Women is an honest look at Ireland’s rebel heroines.

In the wake of what have been massive strides taken for Irish women, from the historic win for repeal, to the ‘I believe her’ movement, and the slow unveiling of the Magdeline atrocities, constitutive of the reality of the oppressive church-state hybrid, Revolting Women – A Rebel Cabaret chronologically documents the women’s experience of Irish society from the 1916 Easter Rising in a vulnerable, buoyant collection of performances.

A mixed-media production, the all-female cast, or self-titled ‘rebel sisters’ use song, dance, film, and drama to tell the stories of Irish women, from prominent revolutionary figures such as Countess Markievicz, to everyday ‘superheroes’, highlighting both the struggle endured by Irish women, as well as their unfaltering strength in the face of adversity.

Donned in anachronistic dress and performing on a near-bare stage lit by a sole lamp in the corner, the rebel sisters filled the quiet, dark room with illuminating anecdotes, emotive renditions, and calls to action, emphasising the importance of those who came before us as integral to building a future for those who will follow.

Centred around the theme of rebellion, every piece endeavoured to tell a woman’s story, be it of the sex-workers struggle in an Ireland where colonial power had been replaced by church power, the LGBT+ experience told through “no star lesbian”, beautifully sung by BeRn, or a poignant dance piece of a working-class maid – the cabaret is a tribute to women who stood against the status quo and paved the way for the liberation we both enjoy and continue to seek, as ardently stated in one of the pieces: “I remain a rebel, unconverted and unconvertible”.

Drawing on heartstrings, inspiring giggles and raising fists, Revolting Women – A Rebel Cabaret is an honest production and a testament to the inextricable link between art and politics.

If ever a show did what it says on the tin it’s this one. It’s a celebration of 100 years of female rebellion and the fight for equal rights and a group of performers tell stories of protest and passion through music, dance, film and drama. Starting with a song called Grace Gifford about the wife of James Connolly from singer/songwriter BeRn the scene is set for an uplifting evening of female empowerment. Alongside the music there are short dramas about Countess Markievicz and the women of the Monto back in the day, inspired dance performances and a couple of thought-provoking videos from producer Sonya Mulligan.

The stage is draped with gold curtains, a kitsch lamp and fairy lights and is reminiscent of a turn of the century cabaret club. Each thread works as a standalone piece and audience members will all no doubt have their favourites. The songs are infuriatingly catchy although they are not all upbeat. Magdalene Laundry blues, in particular, is extremely poignant. A film clip called Funbags and Fannys drew many laughs while Yvonne Kavanagh’s three-part tune Struggling Woman, threaded throughout the work, has the audience clapping along before building to the finale where all of the cast and creatives take to the stage for the last chorus.

This really is a celebration of the feisty women who fought for equality as well as a nod to those who still continue to push for change. Unsurprisingly, the audience was predominately female although the men seemed to enjoy it also. I do wonder what a male reviewer would have made of it though.

My one bugbear was that some of the segues felt a bit clunky. However, this could simply be down to the restrictions of the venue. Despite this it was refreshing to see a proper cabaret performed with such passion.

Despite the fact that it celebrates struggle this is an extremely uplifting show and a wonderful tribute to some remarkable women. You don’t have to be a feminist to appreciate this. It is a wonderful evening’s entertainment featuring some very talented ladies that would even warm the cockles of Molly Malone herself.

Read the full article by Fran Winston on No More Workhorse here. 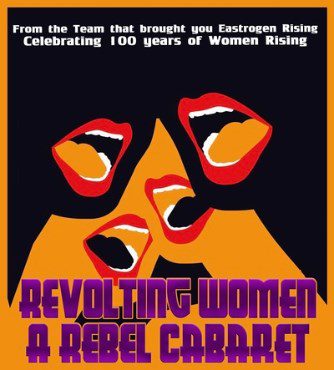