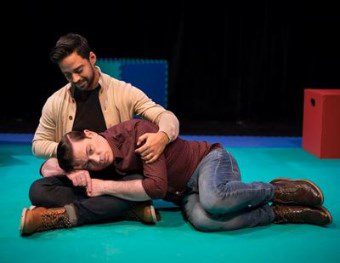 ‘The Baby Monitor’ asks courageous questions about gay parenting, race and discrimination from loved ones – and it offers no easy answers.

“Stallings’ writing combines with Jones’ performance to ensure we cannot empathise with one without understanding the other”.

The Baby Monitor, written by David Stallings and directed by Antonio Miniño, has travelled to Ireland from New York. Given the current anxieties in this country around same-sex parenting, though, its themes feel alarmingly close to home.The play opens with gay fathers Damon and Phillip enduring a tense visit from Damon’s cousin Claire, a woman whose support for their new family only goes so far. As talk about politics is clumsily avoided and awkward comments on Phillip’s Dominican heritage stack up, we learn that – despite her genuine love for her cousin and her insistence that she supports gay rights – Claire has not entirely escaped the influence of the conservative family in which herself and Damon were raised.

Racked by grief over her own infertility, she allows herself to doubt the validity of her cousin’s family – and when a photo in Damon’s new family album exacerbates her anxieties about gay parenting, the results spiral out of control.

Stallings and Miniño, a married couple in real life, play the lead roles of Damon and Phillip. They are joined by a small cast portraying characters all bound by familial ties of one sort or another – Amanda Jones as Claire, Leo Goodman as her husband Josh, Greta Quispe as surrogate and nanny Soledad, and Mel House as egg donor Shelly. And this tight-knit cast really do feel like a family, each performance echoing and bouncing off the others with a skill that makes the relationships depicted appear hauntingly real.

A particular standout is Jones’ Claire. Although the character’s actions cause pain, for her loved ones and for herself, it is impossible to hate her entirely. Claire and her cousin Damon are a lot alike, both struggling with a shame instilled in them by their dysfunctional family and both given to neuroticism. Stallings’ writing combines with Jones’ performance to ensure we cannot empathise with one without, to some extent, understanding the other.

The minimal set features four chairs and little else, besides a hanging line of children’s colouring pages painted by children in a real New York pre-school. The authenticity of this detail, noted in the play’s programme, sets the tone for a performance that feels unfailingly authentic.

No character in The Baby Monitor is reduced to a stereotype or a figurehead representing his or her worldview. Indeed, Damon and Phillip are far from idealised representatives of same-sex parenting. We realise, as the play progresses, that they have unwittingly placed their friend and surrogate Soledad in a position she finds emotionally unbearable. A Dominican song concerning a woman who gives away a child, recurring near the play’s conclusion, bears witness to the unmet needs of the woman who carried Damon and Phillip’s baby.

On a more mundane level, we see Damon release the anxiety he shares with his cousin in sometimes uncomfortable outbursts – at one point shouting at Soledad in front of company for forgetting not to buy a product on his personal (extensive) boycott list.

People connect over more than their political views, the play emphasises, but an inherited political bias can be enough to tear any connection apart. In one powerful scene, Damon is asked why he has failed to cut his dangerously homophobic cousin out of his life. The answer is simple: he has already cut out aunts, uncles and cousins by the dozen.

“I’m tired of telling people ‘Your views hurt me. Get out,’” Damon says, and his words resonate throughout this sensitive and timely play. Some in the LGBT+ community who have suffered discrimination from loved ones still love who have discriminated against them. We try to give people second chances, but it puts our safety at risk – and The Baby Monitor shows that, when we ask ourselves whether we should stop trying, there’s sometimes no easy answer.

It’s core theme is judgement and it challenges the audience to do the same. Playwright David Stallings (Damon) has crafted some plausible characters with unpleasant attributes that reflect the shift in the values that were once the engine of “the land of the free”. Philip and Damon have a two year old son Caleb by a surrogate and their eclectic circle of friends form a strange and competitive family network. This is where judgement comes into play. The people, the parents bring into the boys life are motivationally suspect and emotionally damaged. Why do they do that? There is a self righteous neurosis running throughout the story, beautifully portrayed by Amanda Jones as Claire and Greta Quispe as Soledad the Nanny. Leo Goodman as Josh has a decency Caleb needs in his life and I hope he gets many an opportunity to throw a ball with him. Mel House (Shelley) has fire and a spirit Caleb will need to get through life and to survive this household. It’s a tale that resorts to cliche at times to evoke empathy but it doesn’t conceal the cracks in this fractured and ruthless family network. There are serious issues such as surrogacy, faith, values, racism and love all twisted up in a victimhood that really raises an eyebrow. We don’t see the argument used to restore justice, we never encounter the environment that gives us confidence justice will prevail. It’s all about the adults when it really should be about the child. Directed by Antonio Minino with considerable flow, this challenging play raises many contemporary issues, many unresolved legalities of “legitimate parenthood” and demands that judgement prevails. The risk to Caleb in this family is presented as sexual orientation – for me it was never that. It is the risk presented by damaged parents and very poor (though limited by circumstances) extended family choices. There is no warmth in that home. There is defence of being, emotional baggage in abundance, assertion of rights, and relentless adult selfishness. It left me gasping at dysfunction, not caused by orientation, but by personalities that were lacking in so many ways. This is a powerful play about damaged people in fraught circumstances. There were many fine performances, especially amongst the female actors. At times angst and self pity replaced emotion and empathy, as the characters drawn demanded. As an audience we wanted to have our say in the face of such selfishness. I stood up at the end. I worry for Caleb still. Go see it!