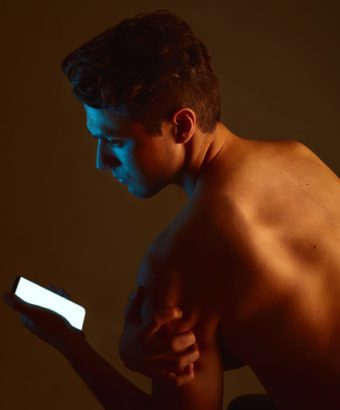 Set against the backdrop of the 2017 #MeToo movement, VELVET explores the complex realities of harassment within the industry and how far a person is willing to go to achieve their dreams.

Velvet is a one-man play which offers a raw and destabilising insight into the complexities of sexual harassment in the digital age of the acting industry.

Both written and performed by Tom Ratcliffe, Velvet tells the story of a young, aspiring actor struggling to orient himself around his sometimes conflicting ambition and moral compass.

Standing upright in centre stage and looking straight ahead for the majority of the production, Ratcliffe switches between a number of different characters with grace, each identifiable by the skilful ease with which he changes his expression, voice and posture.

What first begins as a tentatively humorous tale of Tom’s acting career, slowly transforms into a visceral, jarring account of coercive control. This production offers a new perspective on the LGBT+ aspect of the #MeToo movement, using an overhead screen and a robotic, disembodied voiceover to document the Grindr and WhatsApp conversations between an aspiring artist and a ‘casting director’, highlighting the dangers of online anonymity.

An ode to the velvet cover of a casting couch, Velvet shifts between and the personal and professional, the online and the offline to highlight both their differences and convergences, particularly the effects of outside-abuse on personal relationships and the link between sex and power.

Refreshingly humble, this play also travels far beyond the dark side of the acting industry, alluding to the banality of everyday life, from forced conversations with old home-town friends to back-handed compliments from an anxious mother to the agonising wait for the coveted blue tick on WhatsApp from an ex-partner.
Read the full article by Isidora Durán Stewart for GCN here.

Our hero “Tom” is a drama graduate, pretty, not untalented and is hurling himself into an industry packed with wolves.

Velvet testified that most drama students need a module on the industry and how it is supposed to work and how you navigate that and it’s clear our “Tom” either skipped that class or more likely was another drama graduate, deluded by the degree awarded, into thinking it equips you for the workplace. It doesn’t. Tom is a nice guy, he shows good judgement at times when not bring a bit of an airhead. Armed with a drama degree and a sense of entitlement that an older boyfriend or his Mother should provide for him long after graduation, he struggles as entitlement benefits evaporate. He comes down to reality in this well crafted piece with a bang. He is catfished online by “a casting director” who promises him stardom and in the desperation that is the system of audition and agents he has a choice to make. The abuse of power, the trading of sex for stardom is an all too familiar topic for women in the industry. Gay men were never seen as men in the arts but as boys – lesser men. “Tom” with his mixture of misplaced arrogance and vulnerability is ripe for the plucking and he is rightly plucked! Tom Ratcliffe, writer and performer has constructed a piece of thought provoking theatre that shines a floodlight on the theatrical toxin of sexual harassment and online exploitation. His engaging well timed performance style convinces, as at times we the audience want to shout stop – but Tom isn’t the kind of rookie who listens. Velvet is uncomfortable in its misuse of power and exploitation of fresh faced talent. It is theatre well done.