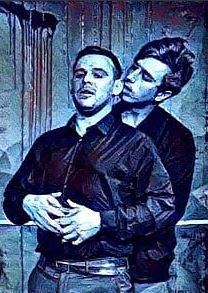 Fronting/The Tearing Up of Fergal and Tim *****

This very fine double bill serves up an appetiser featuring a gay couple’s attempt to have a civilised break-up, and for the main course there’s a new play from Scotland about living with HIV.

The Tearing Up of Fergal and Tim: Great insight and humour

The Tearing Up of Fergal and Tim shows the powerful potential of the short play, something which we see too little of, but which has become something of a specialty for Blue Heart Theatre. In this finely written piece by Sean Denyer, we understand exactly why Fergal and Tim have fallen apart, but crucially, why they got together in the first place. It captures, with great insight and humour, the huge and sometimes overwhelming lurches in emotions and inadvertent comedy involved in a break-up. The build up to Tim’s eventual destruction of Fergal’s favourite book of poetry is brilliantly paced by the two actors, Mike Kunze and Brian Higgins, (a former winner of the Best Actor prize at this festival), who both give wonderfully nuanced performances. Sometimes and it’s definitely true in this case, less can be more.

In Scottish playwright Darren Hardie’s Fronting, we follow David, who at 21 has contracted HIV from a former boyfriend and is attempting to come to terms with what this means for him. The text skilfully weaves in issues relating to the contemporary management and prevention of HIV with a human story that is deeply affecting and utterly believable. The performances by the young cast are uniformly good, and have a great natural quality to them. Hardie is a young writer to watch, and this is a company I hope returns to the festival in the years to come. HIV-related plays were all over the festival a few years ago and then seemed to disappear as treatment got better. But of course, HIV had never gone away, and this beautiful piece does a brave job in reminding us of that fact.

Fronting/The Tearing Up of Fergal and Tim continues at The Pearse Centre until May 6 at 9pm with a matinee on Saturday at 2.30pm. Book tickets here.