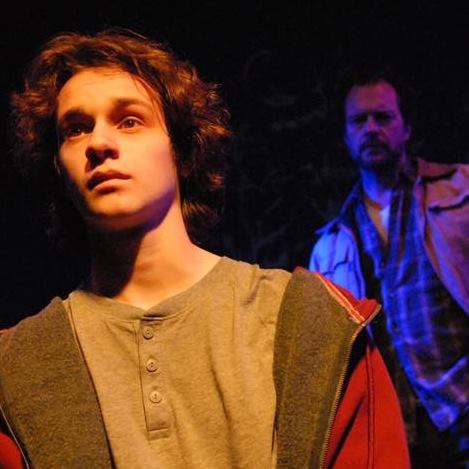 FESTIVAL REVIEW: Lines In The Sand

Lines In The Sand by Jim Dalglish is a real thriller on so many levels. It is a dramatic thriller as this older man rescues a 15 year old boy from a violent altercation in the woods. Why has he been stalking him? It is a production thrill in the quality of the on stage work at all levels. This very fine production co-directed by Dalglish and Ian Ryan is edgy, atmospheric and gripping. Nick Bucchianeri as the 15 year old boy is stunning, vulnerable, brave, sensible and loyal. Tony Travostino as the Man, is rugged, sinister, tough, warm, and plausibly regretful.

The dynamic on stage between these two actors is at times heart-stopping. Set in a small town in the US over a 24 hour period, the sense of place is beautifully illuminated with graphics by Jackie Reeves and well timed sound effects. These two Man and Boy are from the lower end of the social order dealing with the impact of drugs, religion, sexuality, violence and crime. The pace pushes ahead of the plot in a manner that increases the intensity and unlocks the reason this older man followed a group of teenagers into the woods. The resulting 24 hours show the humanity and the maturity of uncovered hopes and dreams.

You won’t have seen a play quite like this before under the banner of lgbt theatre and you won’t wonder why it is such a worthy inclusion in the programme – it is so well done.