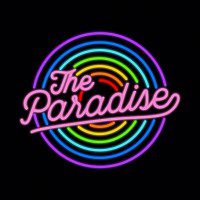 I suspected we were in for a great time at this show  when the doormen of the Paradise, Bernard and Maggie (played hilariously by Sean Denyer and Justine Reilly) were already interacting with the queue, and stamping us with ‘tramp’ or ‘slut’  (FYI: I was judged to be a tramp) on our wrists as we waited.

Presented at the festival by Dublin’s LGBT community theatre group, Acting Out, The Paradise follows a group of friends in 2015 who are meeting up for the closing night of Dublin’s oldest gay club. The return of one of them, Colm (strongly played by Paul Clarke), after a 20 year absence, leads to a flashback to 1993, as a set of events unfolds which will affect them all in different ways over the decades.

A cast of 14 throw themselves into the action with great gusto, and there are some lovely performances, notably from Rachel Fayne as the politically correct Orla, and David Morgan as the excitable Billy. Billy suffers from an unrequited passion for Colm, which is played out in the gorgeously plaintive  song, ‘If I were A Pet Shop Boy’. The songs by Mark Power (who also plays the wonderfully old-style club owner, Eva Destruction) and Ian Henderson, of Irish electro-pop duo Eden, are brilliant, ranging from a gorgeous torch song, ‘Never Again’,  to the very catchy dance number, ‘Going Going Gone’.

The stand-out performance comes from Lorcan McElwain as Irma La Douche, Colm’s old flame. She looks stunning, has a beautiful voice and can put you down with a withering comment at 20 paces (and writer Sean Denyer supplies her with many choice ones).

Musicals are very hard to do, and hats off to director Howard Lodge and choreographer Nichola Mooney for pulling it off. For a community theatre group to put on such an ambitious project and succeed so well, is a testament to the talent in the LGBT community. Thoroughly entertaining.

The Paradise continues at The Complex at 9pm until May 6, with a matinee on Saturday at 4pm. Book here or pay on the door.