Sins of a Smalltown Boy

In his excellent comedy show, “Smart Casual,” comedian David Mills tops his list of things that have gone out of fashion, but haven’t quite realised it yet, with gay. For Mills, as for many others, gay is so over. They could have a point. Marriage equality, corporate sponsorship of Gay Pride, the Eurovision Song Contest, Graham Norton, gay has become so mainstream, it seems it practically is the mainstream. Some would even go so far as to argue that there’s no longer a need for a Gay Pride parade. So is there a need for an International Dublin Gay Theatre Festival? In light of the above, you could argue, possibly not. Yet in light of the mass shooting in Pulse Nightclub in Florida almost a year ago, and of what’s reported to be happening in Chechnya today, you might say it’s needed now more than ever.

At its best, gay theatre has produced some hugely important works and world class writers over the centuries. There are countless precedents here, from Oscar Wilde, the original inspiration for the IDGTF, through to “Torch Song Trilogy,” “Angels in America” and our own “High Heels in Low Places,” to name but a few. Standard bearers dealing with relevant issues, be that AIDS or homophobia, as well as hugely important theatrical works in their own right. With works from homegrown acts, as well as an international contingent from England, the U.S.A., Germany, Canada, Mexico and Scotland, IDGTF certainly has high ambitions of being part of that theatrical legacy. But can the largest LGBT festival in the world deliver on those ambitions?

On the evidence of “Bleach” by British writer and performer, Dan Ireland-Reeves, produced by British Exist Theatre, the IDGTF is certainly off to a solid start. A one-man performance, “Bleach” weaves a dark tale of Tyler Everett, a small-town boy in the big, London smoke, who becomes a rent boy for the money, and for the sex. You have to enjoy what you do, Tyler claims, and he most certainly does, with his quicksilver knapsack full of all the essentials he needs to make the night work. Maybe it’s because he’s now a Londoner, but money is what matters most at the end of the day, and any way you can get it is okay in the end, right? Yet in the streets and penthouses of London, the havoc a rent boy subjects his body to is nothing compared to the insidious damage to his soul, sold, like his body, for whatever he can get for it. In the end, it might all be too much, living life so close to the dark it could be snuffed out in a moment. But when the road to hell is littered with not just good intentions, but bad ones too, or no intentions at all, seeking the ultimate disconnect from yourself might just be the inevitable, final disconnect to top all those that have already gone before.

With “Bleach” Dan Ireland-Reeves delivers a powerful, gripping and intelligent script that walks through the clichés, yet avoids them in the process. Yes, there’s drugs, danger, sex, and even dangerous sex, but that’s not where the darkness lies. From the outset, Tyler Everett’s darkness is a darkness of the soul, one that disconnects him morally and personally from all that he knows should matter, allowing him to do those darker things he knows he should never accept as normal. He wants it to matter, yet he’s driven to explain why it doesn’t, to rationalise it, excuse it, and himself, begging for your forgiveness and understanding, yet not really caring enough if you do understand. Throughout “Bleach,” interest is maintained in Tyler’s struggles, for the most part, though it does slacken off about the three-quarter mark for a spell when musings become ramblings, losing a little of their impact in the process. Yet once normal service resumes, Tyler’s harrowing tale becomes all the more harrowing for being utterly recognisable. The context might be that of a rent boy in extreme circumstances, but the moral and personal experience it speaks to is frighteningly familiar.

Ireland-Reeves as Tyler delivers a deceptively understated performance, offering what almost looks like raw inexperience at times, that’s utterly beguiling and wonderfully effective. His portrayal of a young man whose soul is almost extinguished, dimmed down to the point where there’s just enough light left to highlight the darkness, just enough feeling left to know he feels nothing, is always credible and engaging, showing just enough naivety and vulnerability to remind us that there is still someone here worth saving. Director Bethan Francis keeps pace moving along, delivering a production that, if it shows a little anxiousness in places, hits just the right level of intensity for the most part.

There may be something old-school-fringe about IDGTF, with its off-centre and underground venues, but sometimes that’s where precious gems are found. “Bleach” is one such gem. For IDGTF isn’t just about representing, or celebrating, gay culture through theatre, it’s also about interrogating it, questioning it, as part of the larger human experience. This “Bleach” does very, very well. Pulling no punches, “Bleach” doesn’t feel the need to rain them down on you either, and becomes even more powerful for not trying to be overtly powerful. A potential underground classic, “Bleach” could very well turn into an over ground success. Be able to say you saw it when, and go see it now.

“Bleach” by Dan Ireland-Reeves, produced by British Exist Theatre, runs at The Outpost, Capel Street, as part of The International Dublin Gay Theatre Festival until May 6th 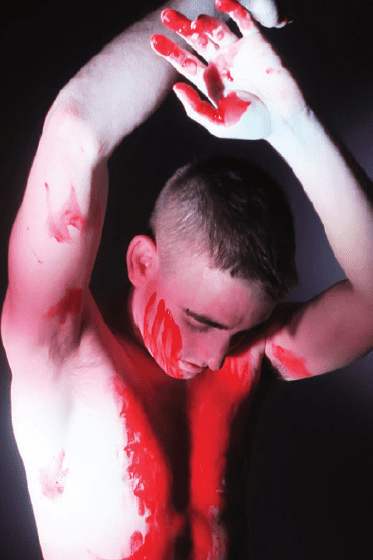